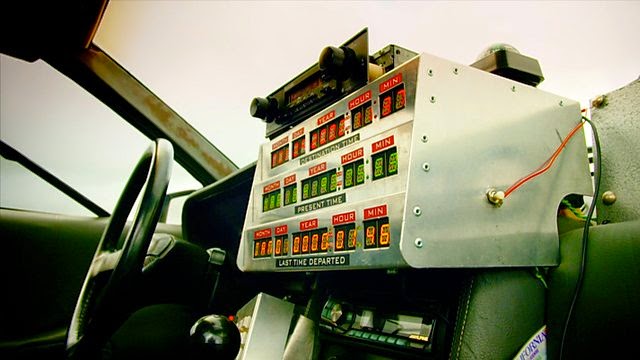 BBC2's landmark four part history of Science-Fiction and its influence on culture concludes with a wheezing, groaning noise and a trail of tyre-fire with a journey through Time.

This is a lighter and less focused ride than the previous episodes, but still watchable and highly entertaining, with some interesting turns.

As with episode two (Invasion), we begin with H.G. Wells, and this time Dominic Sandbrook uses The Time Machine and Wells' riffing on his own social concerns as a jumping-off point.

Before long, we jump to a lengthy section on Doctor Who - generously represented by a glut of clips, plus interviews with David Tennant and Steven Moffat. Sandbrook gets to visit the Doctor Who Experience, where he's clearly having a whale of a time. Surprisingly though, the main message here is basically that Doctor Who is great. The time travel juxtaposition stories, the tales of paradox or dilemmas about changing history, even the time-wimey elements of more recent years are passed over in favour of a clips package. It's good to watch for a Who fan, but actually it's slightly jarring when we move on to Back to the Future - again, well explored and thought out, with a Delorean photo opportunity, but it misses out discussing the clever sequel - which is more a deconstruction of the events of the original film, which is a shame.

Things take an abrupt detour about the halfway mark, when all of a sudden we're not talking about time travel any more, but have moved on to dystopian futures, like Metropolis and Blade Runner, via high-rise brutalist architecture and J.G. Ballard. All interesting and thought-provoking stuff with more good talking heads material from Edward James Olmos and Rutger Hauer, but it goes quite off-piste until we return to time travel with Chris Marker's haunting La Jetee, composed of haunting stills, to be remade thirty years later as Twelve Monkeys - and ultimately its spiritual successor Looper.

The theme of being stuck in a single moment rears its head with Groundhog Day - time travel as metaphor for making a difference, writing wrongs, and saving yourself, neatly dovetailing with Quantum Leap, but largely skipping over A Christmas Carol.

This is a strange oversight, but we do get Donald P. Bellisario's explanation of the germ of the series, an encounter he wished he could have changed with hindsight - his fractious meeting with a Pravda-reading fellow conscript whilst serving in the Marines in the 1950s - one Lee Harvey Oswald.

The romantic, yearning side of time travel is addressed briefly with The Time-Traveller's Wife, but we're soon back with Doctor Who - as Sandbrook concludes by meditating on the Doctor's relationships with his human companions and the emotional price of this. As Neil Gaiman aptly remarks, for the Doctor it's deferred bereavement just becoming friends with him.

Despite this heavy concept, we end on a note of childlike excitement, with Sandbrook on the set of Peter Davison's TARDIS, pointing out that if you could time travel - you would. With a press of a button, the central column rises, and he's gone.

Tomorrow's Worlds has been a real highlight. Occasionally it's wandered slightly off-book with some of the material used, but that's forgivable when you have four episodes of this quality, with such good interviewees and such a motherlode of archive footage so ably strung together into compelling stories by the excellent Sandbrook. Here's to tomorrow.
Tweet
FILTER: - Documentary - BBC Two

Free Doctor Who Events in Liverpool