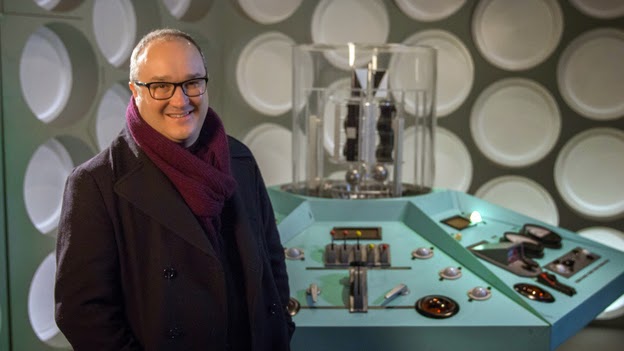 The BBC loves a good documentary series, and when it does it well, it really earns that licence fee, with thoughtful, lavishly-packaged hours full of insight and A-list talking heads.

Tomorrow's Worlds: The Unearthly History of Science Fiction doesn’t disappoint. It’s an expansive look at the many worlds of Science Fiction - quite rightly recognised as a major part of modern popular culture, something that captures imaginations in the media, in technology, and in everyday life.

Ably fronted by historian and broadcaster Dominic Sandbrook, Tomorrow's Worlds takes a thematic approach to exploring Sci-Fi’s reach within popular culture. The first episode of four, Space, features Sandbrook exploring various depictions of mankind reaching for the stars through film, TV, and literature. Starting off with an obvious crowd-pleaser in Star Wars, Sandbrook uses this as a jumping-off point to examine a glut of takes on space exploration and colonisation such as 2001: A Space Odyssey, the impressionistic work of Georges Melies, Dark Star, Avatar, Alien, Star Trek, Battlestar Galactica, Ursula Le Guin’s The Left Hand of Darkness, Frank Herbert’s Dune and Kim Stanley Robinson's Mars Trilogy.

There are some familiar tales for the initiated. A glum George Lucas complains to Dreyfuss about wanting to make an art movie. Nichelle Nichols speaks of her experiences with Martin Luther King and NASA. Veronica Cartwright trots out her anecdote about her infamous reaction to the Alien chest-burster scene.

But, we also get to see Anthony Daniels be surprisingly scathing about Star Wars, to hear Keir Dullea’s take on the surreal final scenes of 2001, and the thought-provoking argument that Gene Roddenberry’s utopian vision of the future shows a harmonious, integrated mankind free of war, disease, and debt - but, beneath these trappings, it’s a lot closer to Wagon Train and Bonanza than immediately meets the eye. Trek’s mankind is arguably an updated version of the frontiersman, moving from civilisation to civilisation and showing each in turn the error of their ways. Glen A. Larson’s Mormon faith informs his original vision of Battlestar Galactica. Very real fears about the price of progress and splits in society riddle the Mars Trilogy. This is all expertly teased out by Sandbrook, who is clearly in his element not only as a historian, but a fan of SF, as demonstrated by the lengthy conversation he shared with Reviews in Time and Space about the Doctor Who season finale over a drink afterwards.

This first episode was premiered as part of BFI South Bank’s epic Days of Fear and Wonder season, and was followed by teaser clips from the remaining episodes: Invasion, Robots, and Time, variously touching on Doctor Who, Frankenstein, Blade Runner, and Quatermass. At the Q&A that followed, moderated by Samira Ahmed - Sandbrook and producers John Das and Ben Southwell spoke with great pride about the series, a co-production with BBC America. They revealed amongst other things, that the decision to split the episodes by theme was taken to avoid repetition - and showed some regret at not having a fifth episode to explore SF dystopias, and Sandbrook lamented the lack of space in the final cut for Blake’s 7.

You may know a lot of the stories in Tomorrow's Worlds, and the stories behind the stories, but episode one of this series succeeds in telling them in a new and interesting way, and in its themed approach, it barely scratches the surface.

Season 9 announced as next Collection Blu-ray